What are Northern Lights?

The Southern Lights  in the Southern Hemisphere are almost identical to the Northern Lights. The interaction between the gases in the atmosphere and the Solar Wind create the dancing lights in the sky at the North and South Poles. 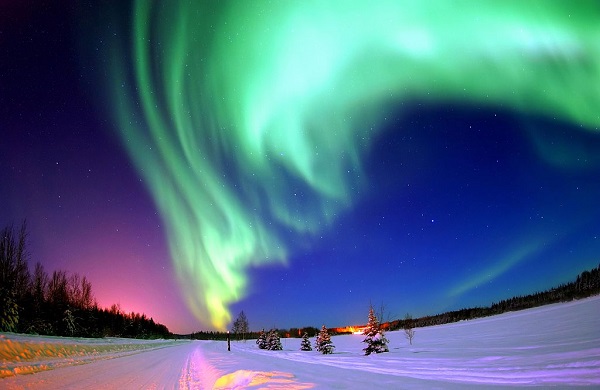 Pierre Gassendi in 1621 named the glowing lights in the sky.  Aurora is the Roman goddess of dawn. Borealis is the Greek word for the north wind. Gassendi chose those two words because the Northern Lights are most active late at night or early in the morning when there is a new moon.

Our Space book includes the latest information about the Solar System, the Sun, and space rovers. Fun space activities are included in every chapter.       Myrna

Two days for the Solar wind to reach Earth
The Solar Wind takes two days to reach the Earth after the peak of the sunspot cycle. When the Solar Wind collides with gases in the Earth's atmosphere radiation is emitted as light. The electrons and protons in the gases are heated. As the electrons and protons cool they produce billions of tiny flashes of light that fills the night sky with the  Northern Lights.

Location of Northern lights
The Northern Lights are located from 80 km  to 640 km (50 to 400 miles) above the Earth. They can last for several hours filling the sky with glowing and dancing curtains of green, pink, yellow and orange lights. Green is the most common aurora color and red is the rarest. Most of the time the Auroras last about 30 minutes.