What is The Ring of Fire?

What is Ring of Fire 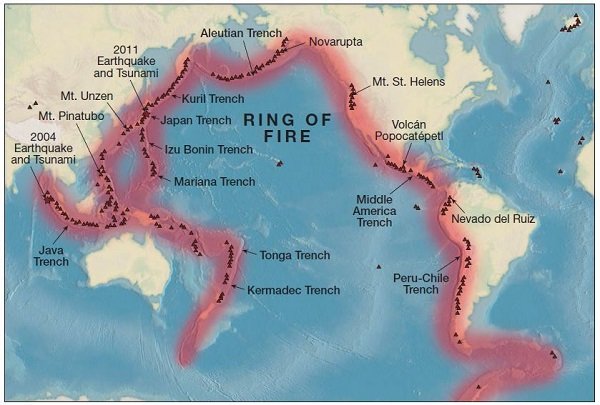 Ring of Fire around the Pacific Ocean   UPSC -IAS

Largest volcanic eruption of the 20th century
The 1912 Novarupta-Katmai volcano eruption was the largest eruption of the 20th century on the Ring of Fire. The eruption began on June 6, 1912. Four hours after the eruption began the ash had reached Kodiak Island 100 miles to the southeast. Ash clouds stretched thousands of miles across the skies of southern Alaska and western Canada. The ash clouds reached Algeria in Africa by June 17th.

Pyroclastic flows
Pyroclastic flows filled with hot ash and gases traveled down the sides of mountain destroying everything in their path. Giant mudflows (lahars) carried ash and other debris to the valleys below. A giant volcanic ash cloud hundreds of miles across filled the skies.

June 15th, a day before the eruption
The day before the June 15 eruption over 60,000 people evacuated the area. They moved to safety because they were shown movies about the destructive force of pyroclastic flows, lahars, and other volcanic dangers.

Five thousand lives saved
It is estimated that 5,000 lives were saved by the evacuation the day before the eruption. The people who died during the eruption were people who refused to leave their homes.

The Ring of Fire is home to 452 volcanoes and 90% of the earthquakes occur on the Ring of Fire.  Chapters in our book include information about deadly pyroclastic flows and lahars caused by volcanoes in and around the Pacific Ocean .            Myrna

Warning six hours before tsunami waves strike
Tsunami waves traveled across the Pacific Ocean striking Hilo, Hawaii. People were warned to seek high ground 6 hours before the tsunami struck. Many people ignored the warning and went down to see the tsunamis. A 35-foot wave came ashore within 1 minute of the predicted arrival time of the first wave. Sixty-one people were killed by the tsunami that had not moved to higher ground.

Tsunami waves strike Japan
The tsunami reached the Japanese island of Honshu 22 hours after the earthquake began. The waves that came ashore were only 18 feet high. The waves destroyed 1,600 homes and 138 people were killed.

The great Alaska earthquake
The Great Alaskan earthquake occurred on March 27, 1964 in the late afternoon. It was the largest earthquake ever recorded in North America on the Ring of Fire.