Formation of hurricanes in the northeast Pacific Ocean were not officially recognized until the 1920s. Most hurricanes move across the oceans from east to west because prevailing winds travel in that direction.

Increased shipping along the west coast of Mexico and the United States alerted meteorologists to the number of hurricane force storms formed in the north eastern Pacific Ocean. 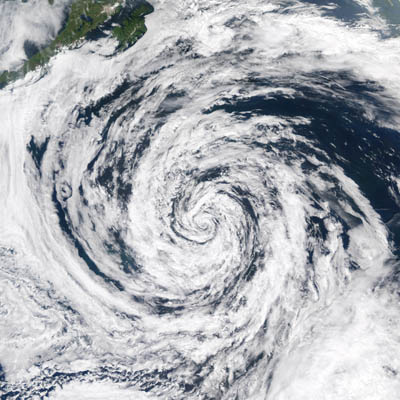 The Spaniards living in Mexico were the first to report the formation of hurricanes that were striking the country in 1730. They wrote about the whirling winds as they came ashore. In the middle of the 19th century meteorologist William Redfield noted that between June and October of 1850 there were five tropical cyclones that came ashore along the southwestern coast of North America. The formation of hurricanes and other storms continued to be documented during the century but most meteorologists still did not recognize that hurricanes would make landfall on the eastern shores of the Pacific Ocean.

Shipping increases on the west coast

The gold rush in California in 1848 created a need for many ships to travel along the coasts of Central and North America. Gold miners going to San Francisco to mine for gold preferred to travel by boat on their journey to the gold fields. Shipping freight and travel also increased after the Panama Canal was opened in 1914. The canal shortened the trip from the east coast to the west coast and was much safer than going around the tip of South America.

Ship captains reported major storms they encountered as they traveled northward toward different ports on the west coast. By the 1920s Pacific hurricanes were officially recognized by the US Weather Bureau. Today the North Eastern Pacific basin is known to be the 2nd most active on our planet.

The North Pacific hurricane season runs from May 15 through November 30th each year. There are on average 16 tropical storms that form in the basin each year. Nine of the storms become hurricanes and four of them become major hurricanes. The hurricane center that monitors the area issues reports, watches and warnings to ships and areas where the storms will make landfall.

Prevailing winds in the North Pacific

The winds in the tropical areas of the Pacific Ocean and Atlantic Ocean generally blows from east to west. This causes hurricanes in the Atlantic Ocean to blow toward the North American continent. These prevailing winds that blow storms landward in the eastern and southern parts of the United States make landfall on average about twice a year. The hurricanes that develop in the North Pacific Ocean generally blow the storms away from the land out to sea.

Hurricanes on the Pacific Ocean

The eastern basin of the North Pacific Ocean is the second most active area on our planet. There are on average 16 tropical storms annually. Nine of these storms grow into hurricanes. Four of the hurricanes increase in strength into major hurricanes.

Where the storms usually make landfall

Most hurricanes in the Eastern North Pacific move out to sea without harming any land areas. Occasionally they recurve to the north or northeast where they will strike Central America or Mexico. Mexico and the Revillagigedo Islands are frequently in the path of these hurricanes. Hurricanes that strike the west coast usually occur either early or late in the hurricane season.

California has had only one recorded hurricane strike the coast in the 200 years that the storms have been monitored. A hurricane in 1858 struck San Diego with gale force winds strong enough to rip off roofs of houses, uproot trees and destroy fences. The winds that carry hurricanes western on the East Coast carry them away from the west coast on the other side of the country. Another factor that keeps hurricanes from striking the coast is the cold ocean current that flows from the north southward along the coast of Washington, Oregon and California.