People often wonder what causes lightning? How can a bolt of lightning suddenly appear when there are no storms within miles? Why is it if you can see lightning flash you are in danger and should seek shelter as quickly as you can. The reason for seeking shelter is that lightning can strike up to 10 miles away from any rainfall. 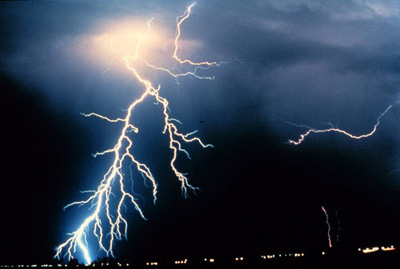 Lightning bolts during a thunderstorm. NOAA

What causes lightning on warm summer days
Lightning is the result of hot air near the surface of the Earth heating up during warm days. The warm air begins rising in an updraft that carries the warm air high above the surface of the Earth. The warm air cools as it rises into the atmosphere. The air condenses as it cools forming water droplets. The water droplets freeze as they move upward forming large cumulus clouds made of water and ice crystals.

What causes lightning is when these two fields become large enough to form giant sparks in the clouds. The excess positive and negative charged particles escape bringing the two fields of particles closer together.

What causes lightning is an electrical current that forms during thunderstorms. It is similar to static electricity that we feel when we shuffle our feet across a carpet and then touch a metal doorknob. Static electricity and lightning both have electrical fields with excess electrons that want to escape. What causes lightning bolts to form is the electrons jumping from one field in a cloud to another charged field.

Static electricity is similar to a lightning bolt. Both have two fields of electrically charged particles. Static electricity occurs when a person wearing rubber soled shoes move across a carpet and stray electrons are picked on the shoe. The electrons build up a static charge that does not move but is looking for a way to escape. When a person touches a metal object such as a doorknob a small electrical spark forms as the electrons move from one object to another discharging the excess electrons.

A lightning bolt is similar to electrical spark formed by static electricity from a rubber soled shoe except it is much larger. Lightning bolts can reach 50,000° F. This is hotter than the surface of the Sun. The lightning bolts travel for such a short time they can strike a tree and not set it on fire even though it sometimes spirals down a tree as it moves toward the ground.

If a thunderstorm in your area is producing lightning or might produce lightning in the near future you should the following warning signs and seek shelter immediately.

More things to know about what causes lightning